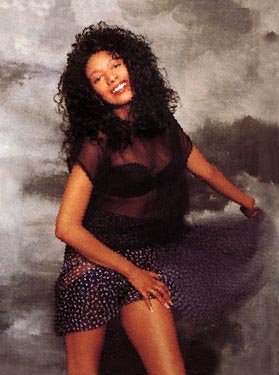 The youngest of the four Pointer Sisters is June (Born: November 30, 1953 - April 11, 2006). She and her sister Bonnie originally sang as a duo, calling themselves Pointers-A Pair (see group bio).

June, known by some fans as the energetic rock & roller, has stepped out on her own many times, even posing in  Playboy magazine. In 1983 she contributed the song "Little Boy Sweet" to the soundtrack for  National Lampoon's Vacation, starring Chevy Chase. That same year, her solo recording career debuted with the release of the album  Baby Sister on  Planet Records. The album was co-produced by Richard Perry and Norman Whitfield. The single "Ready for Some Action" reached the Top 30 on the R&B charts. Another uptempo song from the album "New Love, True Love" was written by June with sister Anita and Trevor Lawrence. "I'm Ready for Love," written by Holland-Dozier-Holland was included on The Very Best of The Pointer Sisters, released on RCA in 1996.

In 1986, the Pointers, with June on lead vocal, joined Bruce Willis for the lively "Respect Yourself", the single, from Willis' debut album. The Return of Bruno, The song reached the Top Five on  Billboard's Hot 100 Singles Chart, and June's solo performance in the video helped it become one of MTV's most popular clips at the time. A year later, June recorded a duet with Dionne Warwick, "Heartbreak of Love," for Dionne's 1987 album,  Reservations for Two.

June's second solo release was 1989's  June Pointer on  Columbia Records. The album was executive produced by Carol Bayer Sager and features a potpourri of other producers, including Narada Michael Walden, Kashif, David Foster and Rhett Lawrence. It was released to enthusiastic reviews from fans and critics alike. The album spawned the R&B chart single, "Tight On Time (I'll Fit U In)." Irene Cara lent background vocals to "Keeper of the Flame" and big sister Ruth helped out with background vocals on two tracks. June appeared on The Arsenio Hall Show and Soul Train to promote the album.

Big Break Records released June's first solo album on CD and it's now available on streaming services. It features a bonus track and interviews with Ruth, Anita and many of the musicians who played on the album.