Experience The Walk Of Fame 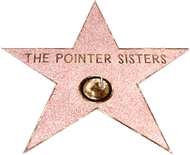 ​Each year, 12 celebrities are awarded a star on the Hollywood Walk of Fame in Los Angeles, California. Some of those honored merely show up, pose with their star and have a few pictures taken. Others make it a real event. And if you know the Pointer Sisters taste for the flamboyant, you won't be surprised to learn that they turned their day into one of the most exciting celebrations in the Walk of Fame's history.

Crowds began swarming to Hollywood Boulevard early on the morning of September 29, 1994, to await the sisters' arrival. But even before the ceremony began, the "show" got underway when the Los Angeles Rams' cheerleaders arrived and warmed up the boisterous crowd. Before long, family members began arriving, including the Pointers' mother, the late Sarah Pointer. Hollywood Mayor Johnny Wright greeted the anxious crowd, assuring them that the sisters would arrive shortly.

That promise was fulfilled when a procession of three vintage Rolls Royces, led by police escorts, paraded up Hollywood Boulevard--the Pointer Sisters had arrived. As the crowd erupted in cheers, the Pointers stepped out of their cars and made their entrance through an aisle of cheerleaders--first Ruth, then June, Bonnie next, and finally, Anita. The crowd went wild as they got their first glimpse of the sisters and their eye-catching threads; as a nod to their beginnings, the Pointers were dressed in a flash of '40s nostalgia. Finally, the ceremony began.

Several friends and celebrities approached the podium to speak about the Pointers; brother Fritz himself told a humorous and heartwarming story about his sisters' beginnings. Record executives presented the group with platinum records for the "Rock Rhythm and Blues" album they contributed to. A major announcement was made that the Pointers would soon star in their own production of the Broadway classic "Ain't Misbehavin' " and tour the world with it. Mayor Wright proclaimed it "Pointer Sisters Day" in Hollywood. And lastly, the Pointers themselves took the podium, each thanking their fans for 20 years of support. Then, the Sisters kneeled to the ground and helped unveil the reason so many had gathered there that day--the Star on the Hollywood Walk of Fame.

In a flash of camera bulbs and TV camera spotlights, the ceremony was over...but the party wasn't. Afterward, the Pointers, and their friends and family, all converged upon the House of Blues club for a private celebration. As the club played nothing but Pointer Sisters classics, Anita, June and Ruth mingled, laughed, partied --and even treated their friends to a sneak preview of their upcoming tour with a "world-premiere" of the song "Ain't Misbehavin' ".

Sound exciting? Wish you were there? Well, get ready--you're about to experience every moment. Put on your party shoes and step back to 1994. You're invited to attend the Walk of Fame ceremony--and celebrate with the Pointer Sisters!

Walk of Fame text and photos by L.D. Debler